Sincerely Yours
written by Sarah O’Connor

Inspired by the Poppies displayed at the Tower of London last year, which had an unprecedented public appreciation. The poppies represented the British heroes who battled and gave their lives to defend our freedoms. Although they commemorated the soldiers lost in the 1st World War, they had significance and relevance to all of us today.

Everybody did their bit for the war effort and the British population rallied. With such great courage on the front line, whilst those back home toiled away to keep the home fires burning. It was an era of stiff upper lip: no matter the personal tragedy, a brave and smiling face would resolutely present front and centre to the World.

Sincerely Yours brings to life some of the backstage dramas overcome by an entertainment troupe when they are dispatched to help the war effort.

Amazing songs that have withstood the test of time, an era of grace and fortitude, songs and dance to uplift your spirits – and of course, the show must always go on!

Such classics as We’ll Meet Again, White Cliffs of Dover, Chattanooga Choo Choo, and 19 others that lift your spirits while on a roller coaster that offers glimpses from a different era and culture. Indulgent nostalgia presented for entertainment.

This new production Sincerely Yours, presented by LAMBCO Productions, has been written by Sarah O’Connor. 12 months researching the entertainment troupes of the 2nd World War brought to life right here.

This musical has been created by the multi-award winning team from the Landor Theatre. Previous collaborations have included The Clockmaker’s Daughter, Damm Yankees, and Next Thing You Know, and Title of Show to name just a few.

Production Pics from Sincerely Yours 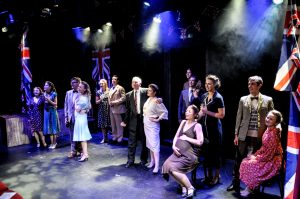 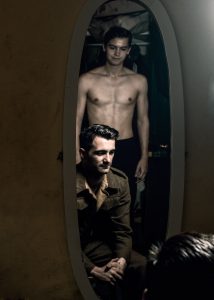