Taking place in a Staten Island apartment over the Christmas holiday season, this hilarious comedy gives a fly-on-the-wall perspective when four friends and a mystery visitor find themselves in just one apartment.

This is the play to see! This is how a sleepover should be.
Makes Big Brother look like Enid Blyton!

Watch as close friends transform an apartment into The Crumple Zone!
This seasonal gem of a comedy is perfectly poised to provide a great night 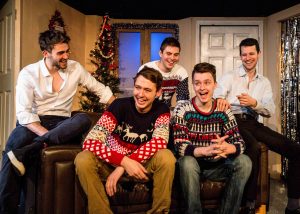