A Musical Revue about Every Body 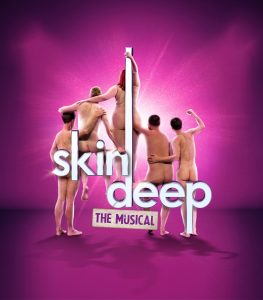 “This fast-moving show is a delightful musical comedy”   THE STAGE

’SKIN DEEP’ is a musical revue about body image, diets, the gym, botox, nip ‘n’ tucks, photoshopping  and the hell of trying to look good in a selfie. It’s a show about every body for everybody!

We live in a culture obsessed with body image.  Magazines, movies and social media rub our faces in our inadequate faces (and bodies) all the time. This show is about hitting back – and learning to love the way we look.

Diana Diamonte hosts, inspiring her four ‘boys’ to explore the naked truth about their bodies and how they feel about them.   With a cast who act, sing and dance, this show boasts a host of brand new musical comedy numbers – in an inspirational evening celebrating bodies of all shapes and sizes!

“One of the funniest things I’ve seen”  WEST END WILMA

AT THE AT THE LOST THEATRE, STOCKWELL, AND AT THE KING’S HEAD THEATRE, ISLINGTON, 2017

“…deserves to be seen in theatres across the U.K and should hold its heads high in the West End with no changes”  MUSICAL STAGES

The show was first seen in its earliest incarnation at the Edinburgh Festival 2007.   (It has since been renamed, rewritten and rebranded.).  For that premiere run it was nominated in four categories in the MTM Musical Theatre Awards – presented alongside the Scotsman Fringe First awards.

WRITER
CHRIS BURGESS has written previous Edinburgh Fringe shows:  ‘SOPHIE TUCKER’S ONE NIGHT STAND’ (Pleasance Cabaret Bar) and ‘FAITH BROWN & HER BOYS IN THE BUFF’   (Pleasance One) and ‘BETTE MIDLER & ME’ (Gilded Balloon).  He also wrote ‘LUNCH WITH MARLENE AND NOEL’ with Kate O’Mara as Dietrich (National Tour), and many other revues and musicals.

ASSOCIATE DIRECTOR/CHOREOGRAPHER
ROBBIE O’REILLY is Artistic Director of London Studio Centre’s Jazz Dance Company.   She has choreographed many shows at the Landor Theatre: ‘FOLLIES’, INTO THE WOODS’ ‘I LOVE YOU BECAUSE’, ‘CURTAINS,’ DAMN YANKEES’ and received several ‘Offie’ nominations for this work.   As a performer she has appeared in the West End casts of ‘CHICAGO’ and ‘FOSSE’